Ask us a question

In the early 1780s James Wingate, a Stirling business man, commissioned the famous Scottish architect Gideon Gray to build a hotel on the site of The Gibb’s Inn Tavern and Lodgings, located in Quality Street Stirling.

The Gibb’s Inn was according to antiquity, “The principal hotel in Stirling catering for coaches going north to Perth – ‘The Difiance’ 4 horse coach leaving at 8.50am – and south to Glasgow – ‘The Rapide’ leaving for Glasgow at 8.30am, both from the pend behind the Inn.”

The Hotel known as Wingate’s Inn opened to much “fanfare and anticipation” in 1786 to “provide a valuable service to visitors and travellers to and from Stirling alike.” 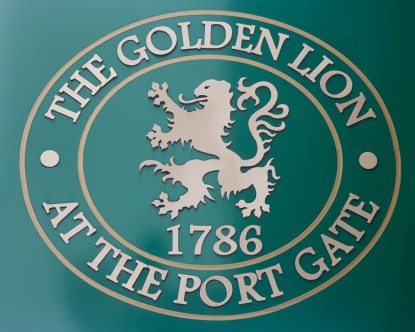 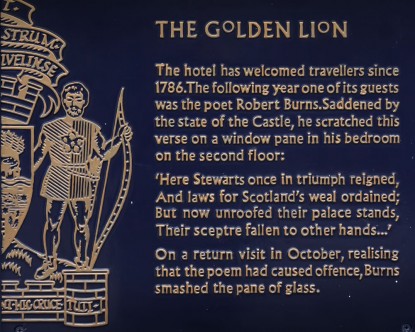 On the 26th August 1787 Robert Burns then aged 28 and his travelling companion Willie Nicol, who was a Master at Edinburgh High School, Latin scholar and student of literature visited Stirling Castle. They stayed at The Golden Lion and in the evening they were joined for dinner in the Hotel by local businessman Mr. Christopher Bell. At the time the Castle was in a very rundown condition and this inspired him to write the famous “Stirling Lines” and etched the following verse on a pane of glass in his second floor bedroom.

“Here Stuarts once in glory reign’d,
And laws for Scotland’s weal ordain’d ;
But now unroof ‘d their palace stands,
Their sceptre’s sway’d by other hands.
The injur’d Stuart line is gone,
A race outlandish fills their throne
An idiot race, to honour lost :
Who know them best despise them most.”

Realising his lament for the deposed Stuart line and shock at the dilapidated state of The Castle had caused offence, Burns returned to the hotel in October of that year and smashed the pane of glass with the butt of his riding crop.

James Macdonald the Hebridean diarist recorded in his journal of the 2nd  June 1796 that he had enjoyed  dinner with Burns the evening previous in Sanquhar Dumfrieshire where, Burns discussed at length his stay at the Golden Lion Hotel. This was only two months before Burns died at the age of 37.

Macdonald who was a 24 year old licensed Kirk Minister wrote,

“He looks consumptive, but was in excellent spirits, and displayed as much wit and humour in 3 hours time as any man I ever knew. He told me that being once in Stirling when we he was a young lad, heated with drink, he had nigh got himself into a dreadful scrape by writing the  (Stirling) lines on the pane of a glass window at the inn.”

These lines were to almost cut short his career as an Excise man before it had even started for he records in a letter that a “great person” had visited him and interrogated him “like a child about my matters, and blamed and schooled for my inscription on a Stirling window.”

In 1820 the name Quality Street was changed to its present name of King Street in honour of King George IV, who ascended to the throne in that year.

In King Street the position of the “New” Port Gate is marked in the road immediately outside the Hotel. The original Port or Burgh Gate played a crucial role in Stirling’s history, because it was here in or around the year 900 that a wolf’s growl alerted guards to the approach of Danish Viking raiders. The raiders were seen off, the town survived, and to this day there’s a wolf on Stirling’s heraldic Coat of Arms.

For nearly two centuries, our Golden Lion Statue, of which we are very proud, has looked down on the “New” Port Gate and King Street, acting as a symbol of protection, strength and confidence. It has presided over many changes in our City, the ups and downs, the comings and goings.
However, one thing remains constant: we continue to strive “to provide a valuable service to visitors and travellers to and from Stirling alike.”